The enduring appeal of the Volkswagen Camper Van 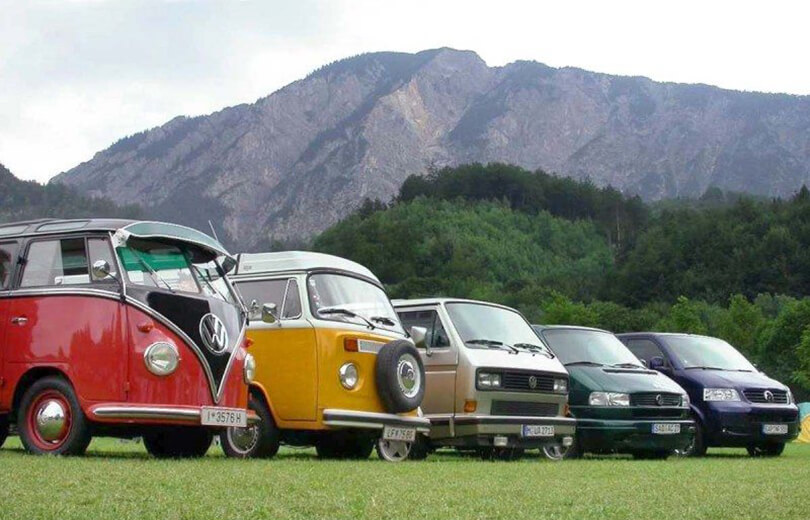 No other motor vehicle has the same iconic status, the same desirability and charisma as the legendary Volkswagen Camper Van.  The classic VW camper is a lifestyle symbol evoking carefree days of sun, surfing and the open road. As fun filled as Scooby-Doo and his hilarious crew. As cool as laid back hippies on their way to Woodstock and as durable and reliable as any Volkswagen engine. The VW Camper Van still rocks the stylish design that was first born over 60 years ago. It is fair to say that no minivan was ever produced by other manufacturers that ever came near to replicating the beloved VW Camper Van’s style.

Believe it or not, the idea for the very first Volkswagen Camper Van was a mere drawing, from way back in 1947 and based on the other famous Volkswagen, the Beetle. Dutch importers, Ben Pon watched the motorised trolleys, made from stripped down Beetle chassis, at work in the VW factory in Wolfsburg and sketched the first van.  It looked something like a box on wheels but incorporated those trademark profile wings that sweep around the front of the vehicle. 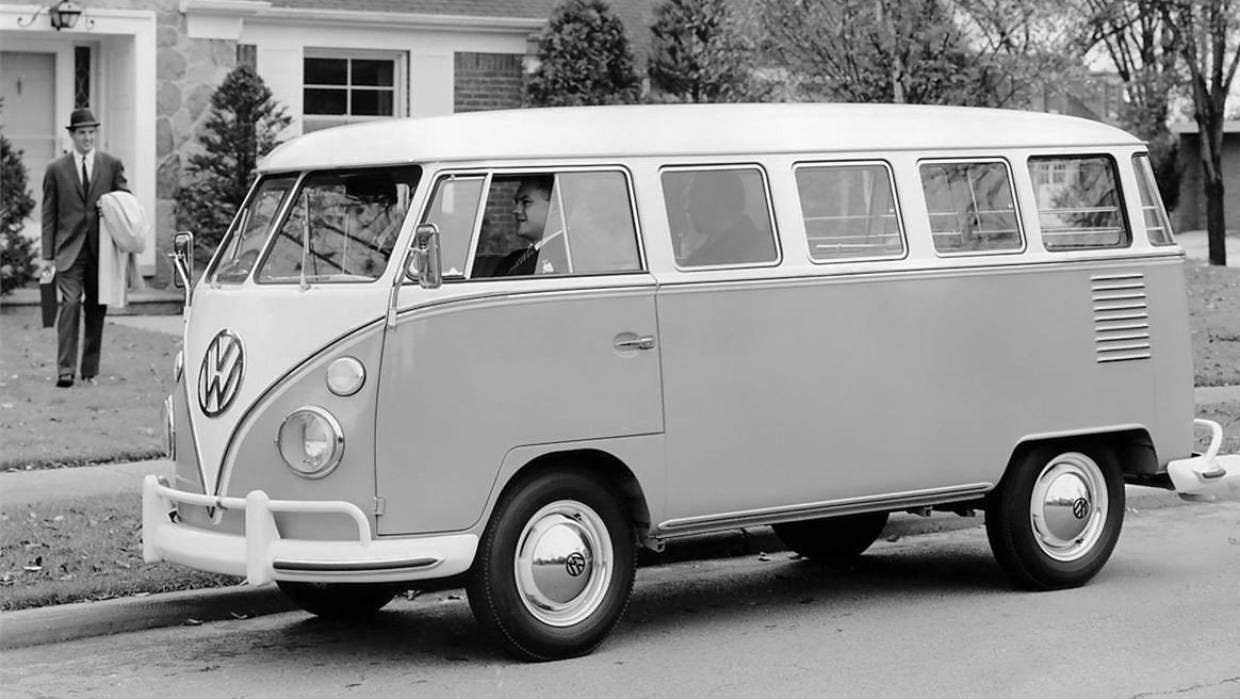 The first VW van was launched at the Geneva Motor show of 1949 and it was the start of a love affair between touring travellers and the ubiquitous camper van that continues through to today.  Throughout the fifties, Volkswagen were producing ten vans a day and over 5 million different combinations of the VW Camper design were rolled out over the next 40 years. The original design was modified as buses, milk van floats, fire engines and even ambulances, but it is the camper van which retains the most admiration and appeal.  At all times, the popularity and practicality of the vehicle ensured a growing fan base.

In 1985, the model got a full revamp with a new exhaust system, front suspension, sliding door locks, and fuel injections system.  That year a least 1,000 improvements were made to the beloved VW van. By 2013, fans were bemoaning the last VW camper rolling off the assembly lines in Brazil.  Some 63 years after the first classic van drove off into the metaphorical sunset with flower power hippies enjoying the ride.  But this would not be the end of the world’s favourite camper van. In the tradition of this trademark beauty, new and better versions were produced in the last few years. In fact, this year Volkswagen camper sales were up 25% overall and had risen a staggering 1,000% in June following the reopening of dealerships in May when dealerships.

The launch of the California Beach model and the global pandemic combined to make the VW a very sweet option for safe staycationing and holidaying in a space that is entirely yours.  The basic California Coast comes with a small fridge, kitchen cupboards, tanks for drinking and wastewater, a two-burner gas cooker, and two double beds and of course, it also comes with the kudos of being a VW camper.

Older VW models still maintain high prices as collectors’ items in themselves and enthusiasts even gather for annual events such as Campfest, a get together in Co Kerry for lovers of all things VW Camper van.  Not only is the VW camper collectible in itself, but an entire industry of memorabilia thrives on the sale of shaped cookie jars, reproduction die cast models, van piggy banks, posters and almost anything you can think of that can embody that famous shape and all that it represents.  Freedom, Flower Power, Peace and the Open Road. 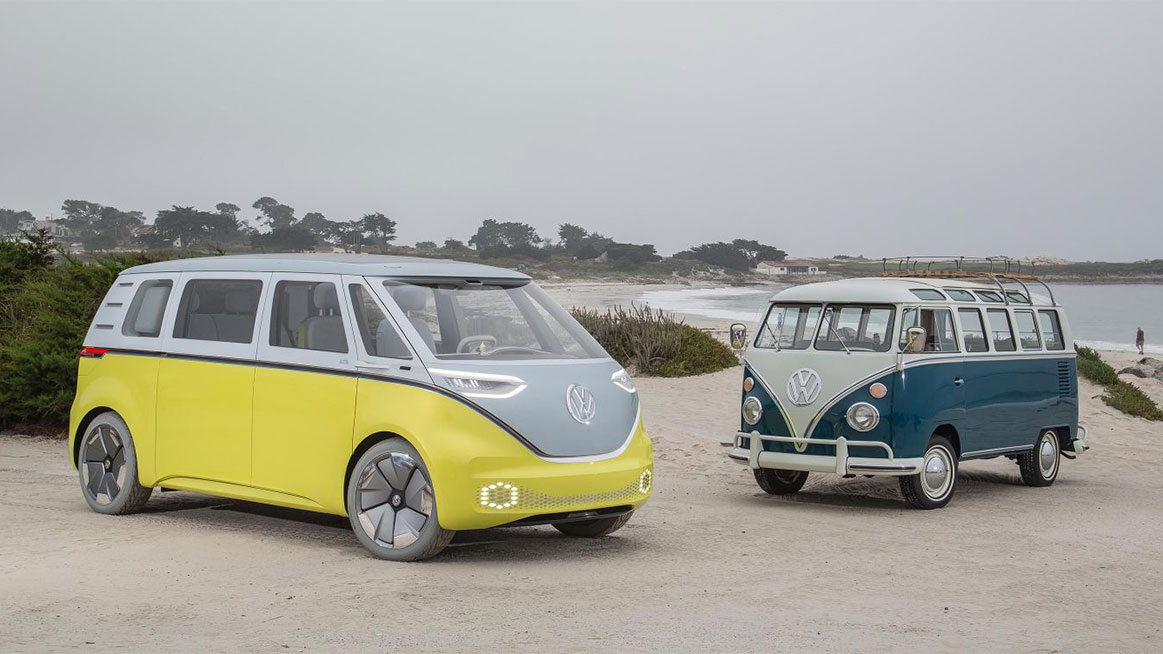 The beauty of this beast has not left us yet.  The iconic VW camper van has been reborn and this time it is powered purely by electricity.  The I.D. Buzz will be on sale in Ireland in 2022 and is very eagerly awaited.  This electric bus design base has not lost any of the original beloved features.  There is split tone paintwork, the oversized VW logo, the classic flat nosed front and a sleek look overall.  However, the two electric motors producing 369bhp, with a reach of about 270 miles takes the VW camper nicely into the future.   It also sports autonomous driving mode, an 8-seat flexible interior, dining and sleeping layout and a steering wheel which sinks into the dash to make it a flat push button console. All this combines to make the I.D. Buzz the absolute consummate VW camper for whenever we are back at festivals, far away beaches and road trips. Is this the final perfect version?   Probably. That is, until its next metamorphosis.  Who knows, the VW may be first camper van in space!   For now, it remains, arguably, the world’s most recognisable, most coveted and best loved vehicle of all times.